The Social Being: A Woman-Run Digital Agency

Home > Technology  > The Social Being: A Woman-Run Digital Agency 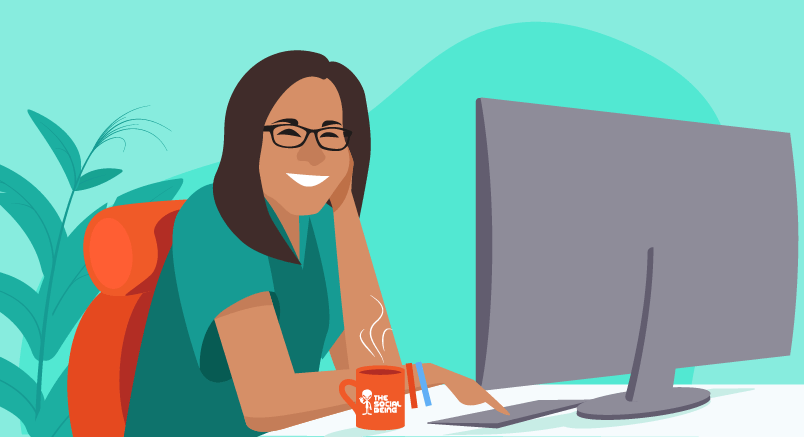 31 Aug The Social Being: A Woman-Run Digital Agency

Posted at 05:22h in Technology by Team Vectribe Agency 0 Comments

How did a woman in San Antonio turn her love of WordPress into a successful digital agency? Below we offer a profile of small business owner Veronica Morales, president of The Social Being.

I met Veronica In March 2011, while volunteering at the WordPress booth at the SXSW Tradeshow. Back then Veronica was trying to learn everything she could about WordPress so she could build a brand-new business.

Since that time Veronica has built a thriving, award-winning national digital marketing agency based in San Antonio, Texas.

At WordCamp US back in November 2019, I caught up with Veronica and talked about her business and how she got started. Here’s her remarkable story.

What is The Social Being?

After years of working in nonprofits, advertising, and promotions, in 2011 Veronica started up a new business called The Social Being. Initially, her idea was to manage social media for companies as a freelancer.

Within six months, clients started asking if she knew how to create a website for their company. Because she had once learned how to code in DOS, she agreed and looked into different platforms.

I fell into WordPress. As soon as I saw it, I loved it. I can’t even tell you what version I came on. I learned it myself as well as HTML and PHP. I started building a few sites for myself and learned WordPress really well.

Even as her business was getting off the ground, she still needed another income to sustain herself. The Social Being had a few clients but it wasn’t paying the bills yet.

It was at that point that Veronica got the opportunity to teach as an adjunct instructor at a local tech college. Initially, her plan was to teach social media strategy. But they asked her if she would teach WordPress as well. So she dove in and gave herself a crash course in everything WordPress.

“When you teach something, you need to know it,” Veronica says, “and you’re going to get all these questions, so you’re learning as well.”

It took her four weeks, and in that time, she learned everything about it.

Her intensive study paid off. She taught classes for three years as her company continued to grow. She brought on her first employee, Megan, who started learning WordPress, and Julia, another team member to do social media.

And now The Social Being employs seven employees and a few freelancers as well, depending on the company’s project workload.

At SXSW back in 2011, Veronica learned about bootstrapping and decided that’s what she needed to do if she wanted to get her business off the ground.

She had about $10,000 saved and she used that to get started. As they grew, she was able to get Apple computers from a $5000 matching grant through the Westside Development Corporation, a subsidiary of the Economic Development Department of the City of San Antonio.

Veronica is proud to say that to this day, the company has no debt other than a small line of capital they opened last year.

What she learned very early on was that a business needs to define its niche.

When The Social Being got started, people would ask her, “can you fix my Joomla or my Drupal site?” To bring in cash, Veronica initially said yes. Eventually, she decided to focus just on WordPress, and it became her company’s main source of income. As she explained,

“I looked at my market and what the market did. There’s several agencies that are on the enterprise level and offer enterprise services at enterprise prices. I also noticed that there’s a lot of freelancers in the market. But there wasn’t really anyone in the middle. That’s where I thought we would niche ourselves.”

Her choice of targeting the needs of smaller businesses who needed WordPress websites and social media paid off.

But it was more than the services she provided. Companies that are intimidated by agencies discovered that The Social Being was much more accessible and approachable. When she started the company, she insisted on jeans and t-shirts.

The Social Being team

“I wanted everyone to come and be comfortable but do what they do well. When people come and walk into our office, not only do they feel the culture, but they’re very comfortable, and I think that they just like us.”

Because she works with smaller companies, she recognizes the need to educate her clients on every phase of every project. This is important so they understand what’s happening and everything is as transparent as possible.

Nowadays, The Social Being does more than social media and WordPress sites. They also offer SEO, SEM, graphic design, reputation management, mobile device ID targeting, influencer outreach, and other marketing services. But they have stayed true to their concept and continue to succeed.

The Social Being is a successful digital agency, but it is also an integral part of the San Antonio community.

Veronica makes sure the company engages with the local population and gives back. At least twice a year they choose a nonprofit organization and build them a WordPress website. They give back by giving free workshops with Launch SA, and Liftfund and Veronica is currently a mentor with the City of San Antonio Economic Development Department Mentor-Protege Program. They take part in the Fiesta San Antonio Commission, a nonprofit that helps plan the massive Fiesta event in the city each year. They’re also a sponsor of the San Antonio Stockyards Historical Society.

A Recipe for Success

Veronica’s story holds many lessons for others who are considering starting their own businesses. Key takeaways I learned from her include:

And there’s one more thing: don’t step on other people’s toes.

Veronica prides herself on running an ethical business. She ensures that every client gets her company’s full attention, whether it’s a $500 job or a $50,000 job. Her pricing is fair, and she is open and honest with them.

As Veronica notes, “I think a lot of the other agencies and colleagues in tech respect us. We’ve never crossed anybody, there’s enough business for everyone in San Antonio.”

Do you want to start work on your own recipe? Our Solopreneur Sale is a great time to try. With hand-picked products ideal for budding solopreneurs, it’s time to try out your idea, for less.