Infographic: Ranking the Top 100 Websites in the World

Home > Technology  > Infographic: Ranking the Top 100 Websites in the World 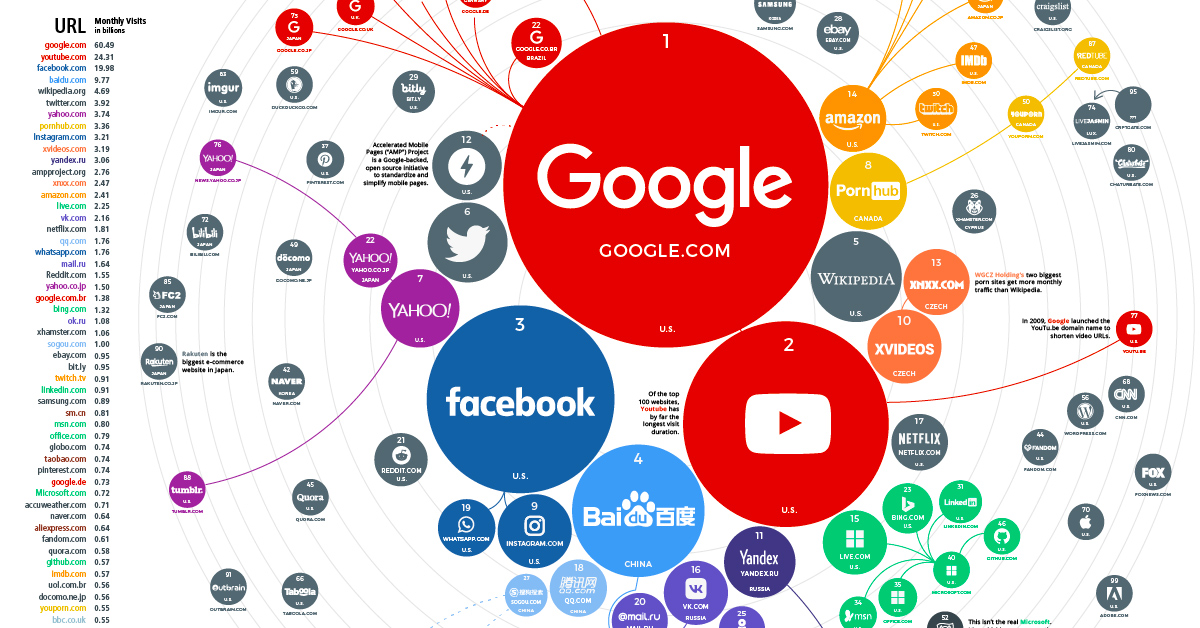 21 Feb Infographic: Ranking the Top 100 Websites in the World

Posted at 16:58h in Technology by Team Vectribe Agency 0 Comments Innovation can be instrumental to the success of economies, at macro and micro scales. While investment provides powerful fuel for innovation—the relationship isn’t always straightforward.

The 2020 ranking from the World Intellectual Property Organization (WIPO) reveals just that.

The above map breaks down the most innovative countries in each World Bank income group, based on data from WIPO’s Global Innovation Index (GII), which evaluates nations across 80 innovation indicators like research and development (R&D), venture capital, and high-tech production.

The economic and regulatory spheres within countries can have an enormous impact on their level of innovation—and vice versa, as innovation in turn becomes an economic driver, stimulating further investment.

The positive feedback loop between investment and innovation results in the success of some of the top countries in the table below, which shows the three most innovative countries in each income group.

Switzerland, Sweden, and the U.S. are the top three in the high-income group. Considering that Switzerland has the second-highest GDP per capita globally, it is not a surprise leader on this list.

Upper middle-income countries are led by China, Malaysia, and Bulgaria. Note that China far surpasses other nations in the upper-middle-income group ranking, reaching 14th spot overall in 2020. Others in the income group only appear in the overall ranking after 30th place.

Below are several income group leaders, and some of their key areas of output:

Shining a Light on Global Innovators

Since 2011, Switzerland has led the world in innovation according to this index, and the top five countries have seen few changes in recent years.

Sweden regained second place in 2019 and the U.S. moved into third—positions they maintain in 2020. The Netherlands entered the top two in 2018 and now sits at fifth.

Here’s how the overall ranking shakes out:

But the nations making the biggest moves in GII ranking are found in Asia.

China, Vietnam, India, and the Philippines have risen the most of all countries, with all four now in the top 50. China broke into the top 15 in 2019 and remains the only middle-income economy in the top 30.

In 2020, South Korea became the second Asian economy to enter the top 10, after Singapore. As the first Asian country to move into the global top five, Singapore joined the leaders in 2018, and now sits at 8th place.

While annual rankings like these confirm the importance of a robust economy and innovation investment, variations in the relationship between input and output are not uncommon.

Below is an overview of the GII inputs and outputs, as well as several of the world’s overall leaders in each pillar.

Input variables can be characterized as factors that foster innovation—everything from the quality of a country’s university institutions to its levels of ecological sustainability.

Output factors include innovation indicators like the creation of new businesses, and even the number of Wikipedia edits made per million people.

Countries with impressive innovation outputs compared to input levels include:

Innovation Fuel Reductions Up Ahead?

Although financial markets have ignited, the economy as a whole has not fared well since lockdowns began. This begs the question of whether a steep decline in innovation capital will follow.

In response to the 2020 pandemic, will spending on R&D echo the 2009 recession and aftermath of 9/11? Will venture capital flows continue to decline more than they have since 2018? Because innovation is so entwined with the economic growth strategies of companies and nations alike, the WIPO notes that the potential decline may not be as severe as historical trends might suggest.

Thankfully, innovation opportunities are not solely contingent on the level of capital infused during any given year. Instead, the cumulative results of continuous innovation stimuli may be enough to maintain growth, while strategic cash reserves are put to use.

What the GII ranking shows is that inputs don’t always equal outputs—and that innovative strides can be made with even modest levels of capital flow.

Given email address is already subscribed, thank you!